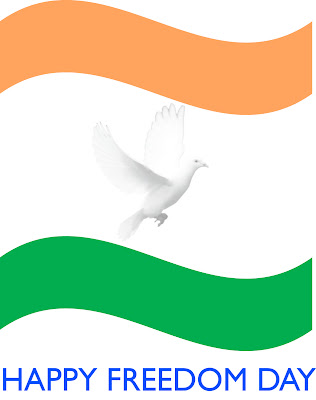 On 15 August 1947, India attained freedom from the British Rule. Every year, August 15 is celebrated as the Independence Day in India. This national festival is celebrated with great enthusiasm all over the country.The Independence Day of any country is a moment of pride and glory. On this special occasion, rich tributes are paid to the freedom fighters who sacrificed their lives and fought to free their motherland from the clutches of the oppressors - British who ruled the country.
At the stroke of midnight, as India moved into August 15, 1947, Jawaharlal Nehru, India's first Prime Minister, read out the famous speech proclaiming India's independence.The moment ended three centuries of British colonial rule. The land was no longer the summer retreat of British sahibs who fancied spices, shikar, elephants and snake-charmers.Independence was also the end of nearly a century of struggle for freedom, battles, betrayals and sacrifices. It also created a situation where we were responsible for ourselves.But it wasn't a period of unqualified joy. For a lot of people, in spite of a new era promised by independence, partition was a painful reality and so was the bloodshed that accompanied it.
The Prime Minister's speech at the Red Fort in Delhi is a major highlight. Patriotic presentations by school children add colors to the celebrations. Delhi’s skyline gets dotted with thousands of kites taking to the sky this day. Similar programmes are held at all the State capitals also.The preparations begin a month in advance. Roads are decorated with flags and buntings. Buildings of national importance are illuminated.
Politics has undergone a personality change from fiery idealism to a pragmatic cynicism. Karma drives the nation on its way forward, and population has crossed the billion mark.But, come August 15, and the people put their troubles behind them for a while, as they stand up as a nation for the National Anthem. Along with the soaring cadences of the anthem, the hopes and dreams for a better tomorrow are renewed in political speeches and replays of the deeds of those who earned us our freedom.
Independence Day is an occasion to rejoice in our freedom and to pay collective homage to all those people who sacrificed their lives to the cause. But it is more than that. It also marks the coming together of more than 400 princely states into one nation - India. This was probably our biggest diplomatic success. Each year, August 15 gives us the reason to celebrate all this, and do much more - it is a time to contemplate what we have and how we achieved it.Though India had no dearth of religious and community festivals, there was, till Independence, no true national festival that the whole country could partake of. Independence Day, beginning as a day to commemorate the greatest moment in Indian history, has now come to signify a feeling of nationalism, solidarity and celebration.Independence Day remained the sole national festival till India declared itself a republic in 1950. On January 26, 1950, Republic Day became the second Indian national holiday.
BE PROUD TO BE AN INDIAN (whoever & wherever YOU are) !!
JAI BHARAT मा तुजे सलाम
Composed by அஹமத் அன்வர் at 8/12/2009 10:27:00 PM No comments:

"BOOKS without the knowledge of life are useless."

"The proper study of mankind is BOOKS."

"BOOKS are the blessed chloroform of the mind."