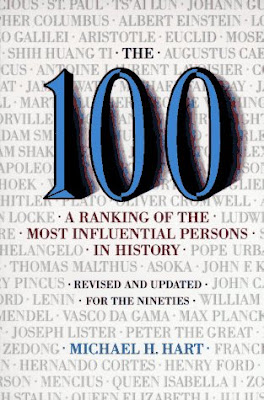 .
Michael H. Hart the author of the book THE 100 which is ranking of the 100 peoples who mostly influenced for human history worldwide.

The central human figure of Islam, regarded by Muslims as the messenger and last prophet of God. Active as a social reformer, diplomat, merchant, philosopher, orator, legislator, and military leader.

Mecca[مَكَةَ ]/[ مَكَهْ ] Medina, is the founder of the religion of Islam [ إِسْلامْ ] and is regarded by Muslims as a messenger and prophet of God (Arabic: الله‎ Allāh), the last and the greatest law-bearer in a series of Islamic prophets as taught by the Qur'an 33:40–40. Muslims thus consider him the restorer of an uncorrupted original monotheistic faith (islām) of Adam, Noah, Abraham, Moses, Jesus and other prophets He was also active as a diplomat, merchant, philosopher, orator, legislator, reformer, military general, and, according to Muslim belief, an agent of divine action.

Born in 570 in the Arabian city of Mecca, he was orphaned at a young age and brought up under the care of his uncle Abu Talib. He later worked mostly as a merchant, as well as a shepherd, and was first married by age 25. Discontented with life in Mecca, he retreated to a cave in the surrounding mountains for meditation and reflection. According to Islamic beliefs it was here, at age 40, in the month of Ramadan, where he received his first revelation from God. Three years after this event Muhammad started preaching these revelations publicly, proclaiming that "God is One", that complete "surrender" to Him (lit. islām) is the only way (dīn) acceptable to God, and that he himself was a prophet and messenger of God, in the same vein as other Islamic prophets.

MUHAMMAD (sal) gained few followers early on, and was met with hostility from some Meccan tribes; he and his followers were treated harshly. To escape persecution Muhammad and his followers migrated to Medina (then known as Yathrib) in the year 622. This event, the Hijra, marks the beginning of the Islamic calendar. In Medina, MUHAMMAD (sal) united the conflicting tribes, and after eight years of fighting with the Meccan tribes, his followers, who by then had grown to ten thousand, conquered Mecca. In 632, a few months after returning to Medina from his Farewell pilgrimage, MUHAMMAD (sal) fell ill and died. By the time of his death, most of the Arabian Peninsula had converted to Islam; and he united the tribes of Arabia into a single Muslim religious polity

The revelations (or Ayat, lit. "Signs of God") which MUHAMMAD (sal) reported receiving until his death—form the verses of the Qur'an, regarded by Muslims as the “Word of God” and around which the religion is based. Besides the Qur'an, MUHAMMAD's (sal) life (sira) and traditions (sunnah) are also upheld by Muslims. They discuss Muhammad and other prophets of Islam with reverence, adding the phrase peace be upon him whenever their names are mentioned.

While conceptions of MUHAMMAD (sal) in medieval Christendom and premodern times were largely negative, appraisals in modern times have been far less so. Besides this, his life and deeds have been debated by followers and opponents over the centuries.

PROPHET MUHAMMAD (sal) IS THE ROLE MODEL FOR THE WHOLE MAN-KIND. (al quran)

.
3
Jesus Christ (7–2 BC – AD 26–36)
The central figure of Christianity, revered by Christians as the Son of God and the incarnation of God. Also regarded as a major prophet in the religion of Islam.

.
4
Gautama Buddha (563 BC–483 BC)
Spiritual teacher and philosopher. Founder of Buddhism.

.
5
Confucius (551 BC–479 BC)
Chinese thinker and social philosopher, whose teachings and philosophy have deeply influenced Chinese, Korean, Japanese, and Vietnamese thought and life.

.
7
Cai Lun (50–121)
Widely regarded as the inventor of paper and the papermaking process.